The Democrats Don't Have A Clue

Why anyone would vote for a Democrat is beyond me.

Did you know that a recent bill was proposed by a Democrat to provide free diapers?

The Diaper Investment and Aid to Promote Economic Recovery Act (DIAPER Act) would “relieve some of the stress on families facing hardship in this economy” by providing this direct service, DeLauro said in a letter to congressional colleagues urging them to co-sponsor her bill.


Responding Wednesday from the Senate floor to a question about a new Democrat plan to raise taxes on working Americans to pay for another $35 billion bailout for the states and public employee unions, Reid said:

"It's very clear that private-sector jobs have been doing just fine; it's the public-sector jobs where we've lost huge numbers, and that's what this legislation is all about."

No, we're not making this up. The comment is utterly wrong, of course, and underscores Democrats' cluelessness and insensitivity to the damage they've inflicted on the private economy since taking power in 2006.

And then Biden accuses Republicans of wanting more rape!


It was on Tuesday during a speech at the University of Pennsylvania where Biden initially argued that another round of government spending was needed to prevent sexual assaults.  “It’s not temporary [administration’s proposed stimulus] when that 911 call comes in and a woman’s being raped, if a cop shows up in time to prevent the rape.  It’s not temporary to that woman.”  Then in the same speech he wished Republicans were themselves rape victims.  “I wish they had some notion of what it was like to be on the other side of a gun, or [to have] a 200-pound man standing over you, telling you to submit.”

Biden’s demagogic language aside, police budgets are the responsibility of each individual state, not federal bureaucrats.  And as Ed Morrissey at HotAir notes, the President’s “jobs” bill doesn’t go directly to hire police officers anyway.  Instead, “it allows states to paper-over budget gaps for another year rather than address their systemic budgetary issues, and protect unionized bureaucrats whose jobs should be on the chopping block.”

The exchange between the vice president and HUMAN EVENTS was taken on Wednesday after Biden gave a speech calling for yet another government stimulus program.  This one is union-backed, and aimed at getting teachers and public-sector employees back to work.

And of course, Obama is out there saying crap like this:


"My plan says we’re going to put teachers back in the classrooms, construction workers back to work," President Obama said at a campaign event today. "Tax cuts for small businesses, tax cuts for hiring veterans, tax cuts if you give your workers a raise –- that’s my plan."

Actually, Mr. Obama, the Republicans want to quit spending money we don't have. If nearly a trillion dollars of "stimulus" money didn't work, why would $480 billion work? If you think the anyone with half a brain believes you, wait until November 2012.

And,
That's the straight stuff!

Hat tip to Gary Simmons (I softened the language slightly)
No comments: Links to this post

I fully support the first amendment and the right of the Occupy Wall Street protesters, as mis-guided and ill-informed as they are.

F. Robert, over at F. Robert's World, could not have stated it better. I repeat his entire post here:

Massive, highly organized, and well financed demonstrations are occurring across the country and in my opinion they represent a perfect example of transference to divert the electorate’s attention from the problems facing President Obama and the Democrat Party. Just consider who is behind these Occupy Wall Street gatherings: MoveOn.org, the Teamster’s Union, the Service Employee’s International Union, George Soros, and several other groups that thrive with the support of the current sympathetic administration and the Democrat Party votes (think ACORN).

With President Barack Hussein Obama’s support continuing to fall in the polls, unemployment hovering around 9.1%, and a strong campaign challenge being formed by the Republican Party, I believe the current demonstrations are all meant to divert attention away from the President’s problems, and cast the Republican’s and their candidates as the villains.

When questioned, many of those demonstrating cannot render a coherent reason for their participation. The main-stream media is granting the demonstrators a major forum with constant video on the major national newscasts, but few if any call attention to the fact that the Democrat Party was responsible for the legislation that led to the collapse of the financial institutions, the failure of over-sight by a Democrat controlled Congress, the failure of Congressional pressures from Senators Durbin (D-IL) and Dodd (D-CT), and Rep. Frank (D-MA). Why were Fannie Mae, Freddie Mac, AIG, and other financial institutions urged to grant loans to individuals who had little or no ability to repay their debt?

These demonstrations are an old political trick that has been around for years and we have seen it work time and time again. When you tell a lie enough times, people will believe it. The banks and Wall Street are not the cause of the current financial problems being faced by this country, because it was the utter failure of Presidential and Congressional leadership to adequately provide proper over-sight and appropriate controls.

Obama’s cohorts were successful in his first campaign using transference effectively and they are doing it again. Wake-up America! You are being used and abused and diverted from the significant issues of the day so Obama’s re-election chances are enhanced by diverting our attention away from the important issues of the day with a phony, divisive, well-organized and financed nation-wide mob action.

Which Speaker of the House had the largest debt increase?

When Rep. Nancy Pelosi (D-Calif.) gave her inaugural address as Speaker of the House in 2007, she vowed there would be “no new deficit spending.” Since that day, the national debt has increased by $5 trillion, according to the U.S. Treasury Department.

The chart below tells a different story. 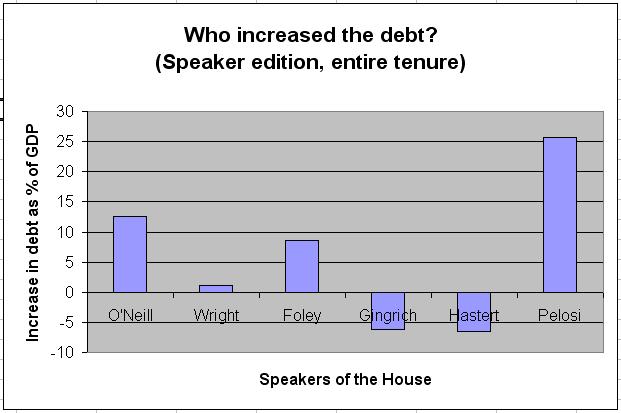 Steve
North Texas, United States
I am a retired military senior NCO with a B.S. in the Liberal Arts and 24 hours of graduate work in communications and management theory. Currently working in the IT industry as a programmer. "Government is not reason; it is not eloquent; it is force. Like fire, it is a dangerous servant and a fearful master." George Washington